Another large wading bird very similar to the curlew, the whimbrel is somewhat smaller with a less pronounced curve to its beak. They begin to appear at Grimsargh Wetlands in Aril to roost, when numbers start to build on The Island Lake. After two weeks or so, they leave and a few return in late summer and autumn, on their way back to their wintering grounds in Africa. In Spring 2018, we had some of the most impressive roosts of whimbrels in Lancashire, with many stopping by on their way to Scotland, Orkney, the Shetland Isles and even Iceland, where they breed. Whilst they are migrating, they stick to coastal areas where access to crabs, shrimps and molluscs is plentiful. Here at Grimsargh Wetlands, they will enjoy a diet of insects, snails and slugs. Although completely harmless, in times gone by, people feared whimbrels because of their spooky call of seven trill whistles.

With long legs and a long bill that curves right at the tip, these birds have a distinctive look that will help you find them. They have a characteristic eye stripe, with brown feathers on top and white below. When they fly, you can identify them easily from their unique white V shape which runs from their back to their tail.

With a slowly decreasing breeding population, the conservation status of these birds is now Red. 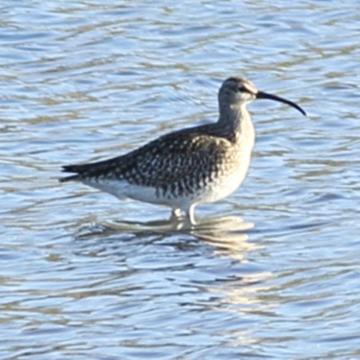 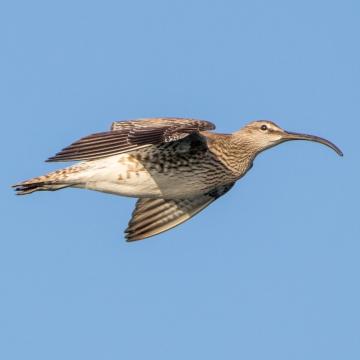