This medium-sized diving duck is a winter visitor from Northern Europe.

It can be found in small numbers on larger lakes and reservoirs, tending not to congregate in large numbers like other species of duck.

Thanks to a conservation programme in Speyside, Scotland, a small number of goldeneye now nest in the UK. They have been attracted to nest in specially designed boxes put up on trees close to water.

Males are black and white with a large domed head which appears to shimmer greenish-black. It gets its name from its distinctive yellow eye and has a white patch between its eye and bill.

One of the most notable things about the male is its courtship display/behaviour.

Females are grey with a brown head but still have the tell-tale yellow eye.

The goldeneye is classified as Amber on the UK’s watch list.
of Birds of Conservation Concern. 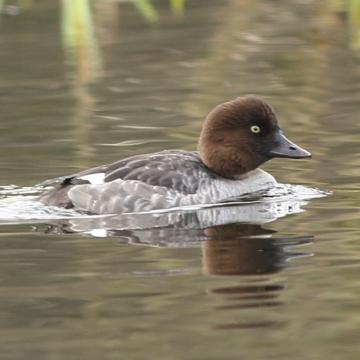