This dabbling duck feeds in the shallow water of freshwater lakes, reservoirs, flooded gravel pits and wetlands, making it the ideal visitor to Grimsargh Wetlands – in particular, The Mere and The Island Lake.

Like its more familiar cousin, the mallard, it feeds by ‘upending’ – putting its head below the water with its bottom in the air.

A small number of gadwall nest in the UK, but mainly in the Midlands and the south-east of England as well as parts of Wales, Scotland, and Northern Ireland.

Large numbers can be seen during the winter as they flock to the UK for the relatively mild weather here.

The male is grey-brown in colour, but both sexes show distinctive white wing patches in flight. 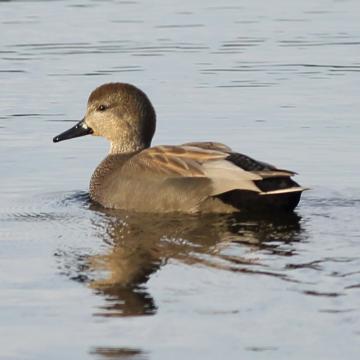